Rules define the conditions that trigger actions in Axonize. For example, a Rule can define that an email is sent to a specific person with a specific message when the temperature of a specific refrigerator goes over 20° and the water sprinkling system can be automatically turned on.

The definition of a rule comprises the following:

In the Axonize Portal, the Rules window shows all the Rules currently defined for an Application. Each row represents a different Rule. 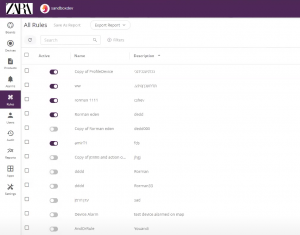 The Rule view displays the following columns of information: