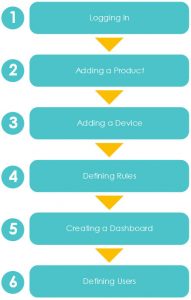 Contact Axonize to set up an account for you. We will send you the URL of the Axonize Portal and the user name and password for logging in.

A Product is a type of Device, and serves as a way of grouping Devices. See Products for a description of what a Product is. 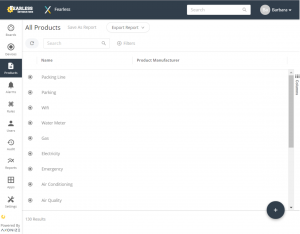 A Device is an entity from which Axonize receives events. A different procedure is required for each type of Device:

Real Devices are real-world entities that send events to the Axonize Server.

In addition, for each type of Real Device, you must define an Events Manifest, which defines the type of events sent from the Device to the Axonize Server. See Defining a Device Event Manifest for more information.

Virtual Devices generate and periodically send predefined random data events from inside the Axonize Server for application testing or demo purposes only.

Virtual Devices can be added using the Axonize Portal (as described below).

Ingesting Events from a Virtual Device 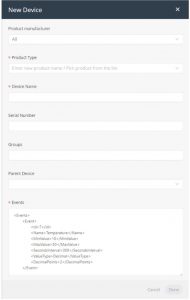 Rules can be defined either using the Axonize Portal (as described below) or using Axonize REST API (as described in Step 6, Defining Rules – Developer Workflow.

Create the Rules that define the conditions and timing when specific actions are triggered. For example, a rule can define that an email is sent to specific person with a specific message when the temperature of a specific refrigerator goes over 20°.

To define a Rule in the Axonize Portal:

Invite users to get started with Axonize. This involves specifying the Applications to which each user is allowed access and the permissions they have for accessing these Applications, such as read-only or editing privileges.

An Application can belong to multiple users.

Each Device belongs to a specific Application.

Each user is uniquely identified by their email address. A user with the same email can belong to multiple Applications and is considered a different user for each, meaning that this user has his/her own password, Client ID/Client Secret, mobile phone number and so on. The information shown in the Axonize Portal relates to this user/email address as two different users.

Users can only access the Applications to which they were assigned.

Sub-tenant users can access all the Applications of that Sub‑tenant.

The auditing feature enables administrators and users to track system activity, including changes in Devices, Rules, Applications and Users.

Defining a User ‒ How To