In the Axonize Portal, the Audit view displays all the actions made by Users in the Axonize platform. Each row represents a different Audit entry.

The Axonize auditing feature enables administrators and users to track Axonize activity, (both in the Axonize Portal and using the Axonize REST API), including changes in Devices, Rules, Applications and Users.

Various entities, (such as Applications) have a configurable retention period, which specifies the number of days to keep the Audit entry in the Axonize database (cyclic buffer). This retention period is set by the API. 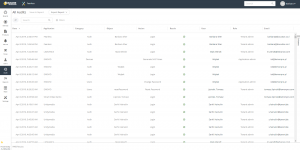 The Audit list displays the following columns of information. All information in this window is read-only: